Home Events Past Events “TURKEY UNDER ERDOGAN: FROM NATO ALLY TO PARIAH STATE”
Past Events
12 December 2017

“TURKEY UNDER ERDOGAN: FROM NATO ALLY TO PARIAH STATE” 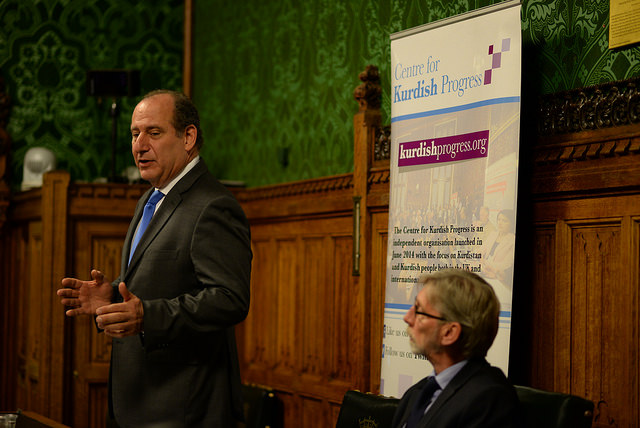 The Centre for Kurdish Progress held a public forum with Dr David L. Philips, Director of the Program on Peace-building and Rights, Institute for the Study of Human Rights at Columbia University, who previously served as a Senior Adviser andForeign Affairs Expert at the U.S. Department of State under Presidents Clinton, Bush and Obama.

Dr Phlilps, who has recently published “Turkey Under Erdogan: From NATO Ally to Pariah State”, offered a detailed and wide-ranging analysis of recent Turkish political history. He began by outlining Turkey’s historical role as a key Western ally during the Cold War, representing NATOs eastern flank. This continued into more recent times, with Turkey’s Incirlik Airbase playing a crucial role in the American intervention in Afghanistan and Iraq.

The Justice and Development Party (AKP), Dr Phlilps argued, had initially committed Turkey to further integration into the Western bloc of nations, promoting accession to the EU and crucial economic reforms. On this basis, Turkey was hailed as a model Muslim nation. Dr Phlilps argued that this was, however, a mistake. The AKP’s commitment to democracy and liberal was not as strong as many had initially believed. This became increasingly apparent after the party won an overwhelming victory at the elections 2011 elections. What followed was the erosion of checks and balances and the brutal crackdown on the 2013 Gezi Protests.

Dr Philips then set out the ways in which he believes this situation was mirrored in regards to the AKPs relationship with Turkey’s Kurdish community. After an initial period of progressive reform, lessening restrictions on the Kurdish language and initiating peace negotiations with the Kurdistan Workers Party (PKK). This changed after the AKP failed to win an overall majority at the June 2015 general election due to the rise of the Leftist-Kurdish Peoples’ Democratic Party (HDP). The AKP government has since launched a massive crackdown against their opponents in the HDP, arresting their national leadership and removing many locally elected mayors and officials.

These developments, Dr Philips argued, had put a strain on Turkey’s relationship with NATO, which he said was not just a military alliance, but one based on shared democratic values. However, there is no mechanism for leaving the common defence union. Dr. Philips therefore recommended the establishment of an Compliance Review Committee, which could suspend a country’s NATO membership after persistent violations of NATO’s values.

David L. Phillips is currently Director of the Program on Peace-building and Rights, Institute for the Study of Human Rights at Columbia University. He served as a Senior Adviser and Foreign Affairs Expert at the U.S. Department of State under Presidents Clinton, Bush and Obama. He was also President of the Congressional Human Rights Foundation and Senior Adviser to the UN Secretariat. He has worked as a foundation executive as Executive Director of the Elie Wiesel Foundation for Humanity, at think-tanks with the Council on Foreign Relations, and in academia with Harvard University’s Center for Middle East Studies. Phillips has authored may articles and reports. His most recent book is An Uncertain Ally: Turkey Under Erdogan’s Dictatorship.