PUBLIC FORUM ‘BELGIAN COURT OF APPEAL DECISION ON THE PKK’ 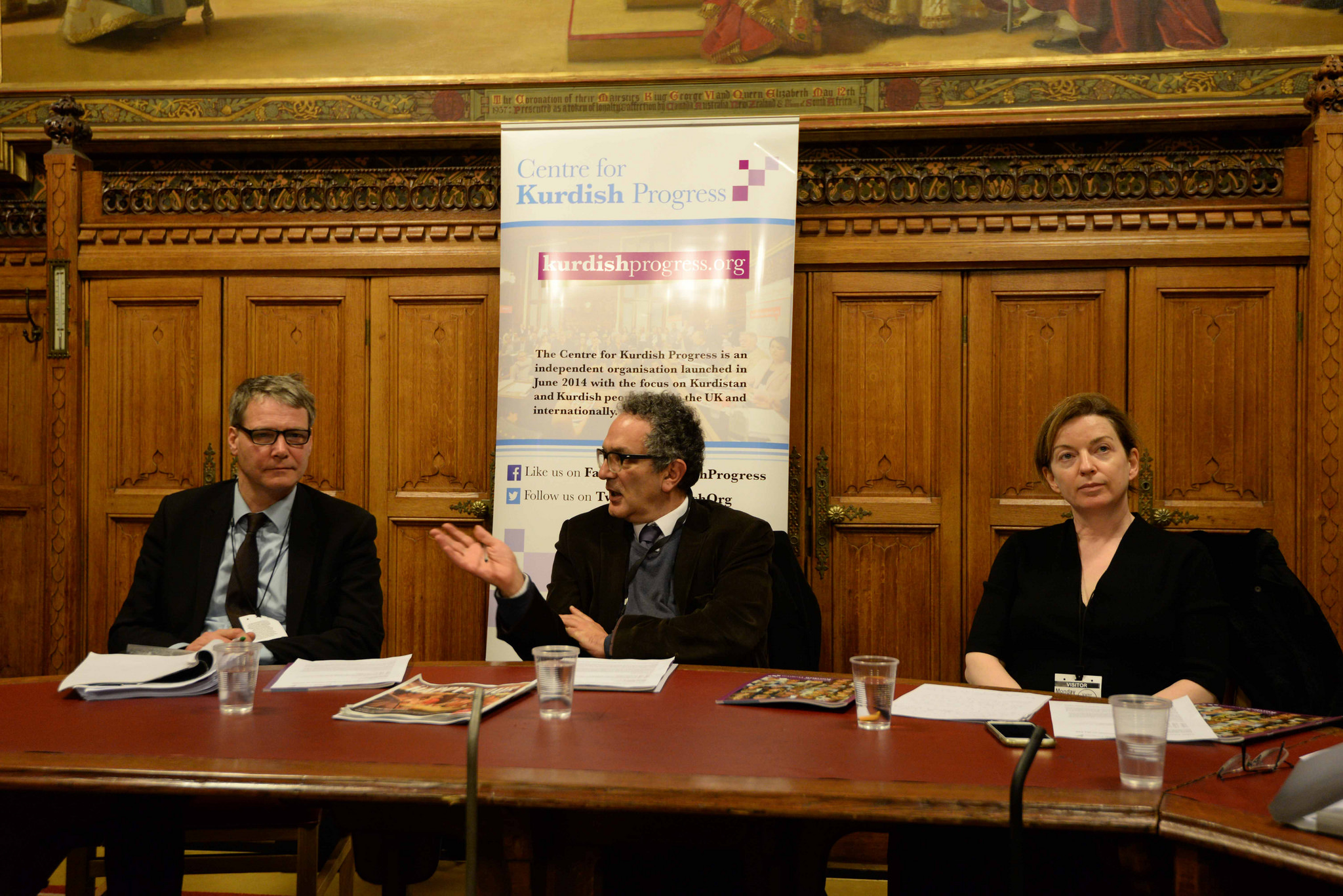 On 20th November 2017, the Centre for Kurdish Progress organised a joint forum in the UK Parliament with the Campaign Against Criminalising Communities (CAMPACC) and Peace in Kurdistan on the recent Belgian court of appeal decision ruling that the Kurdistan Workers Party (PKK) is not a terrorist organisation.

The event was kindly hosted by Lord Maurice Glasman and chaired by barrister Melanie Gingell. Speaking at the forum were Jan Fermon, the Belgium lawyer and Acting Secretary General of the International Association of Democratic Lawyers who argued in court that the PKK is not a terrorist organisation, Alastair Lyon of Birnberg Peirce Solicitors, and Les Levidow of the CAMPACC.

Lord Maurice Glasman opened the forum, paying tribute to the Kurdish struggle against ISIS and for women’s rights in the region. Chair Melanie Gingell introduced the topic, outlining the Belgian court’s decision and heralding Jan Fermon’s successful defence of Kurdish activists in Belgium. She said that the decision presents a landmark “opening”, in both political and legal terms.

Jan Fermon began by stating that the decision might have consequences that stretch beyond Belgium. Mr. Fermon spoke about the background to the case, and the context of draconian War on Terror-era legislation and surveillance of minority communities. He said that in the 1990s, PKK activities were tolerated in Belgium and much of Europe as long as tensions didn’t spill over onto the streets. Since the early 2000s, however, the situation has shifted. From 2006, Turkish authorities have strongly pressured Belgium to act and clampdown on, for example, Kurdish television stations linked to the PKK and members of the Kurdish National Congress (KNK). Fermon said that the US has supported Turkey in its demands, upping the pressure on Belgium and other EU states to comply. In 2008, three Belgian ministers visited Ankara and in early 2009, Belgium’s federal prosecutor visited the Turkish capital too. After that, investigations into members of Belgium’s Kurdish community, deemed to have associations with the PKK, were launched. This led to a case file of, remarkably, around 40,000 pages.

Mr. Fermon spoke about how the issues in Turkey between the state and Kurdish groups constitutes an armed conflict, and so international humanitarian law should be applied rather than national criminal law, or anti-terror laws. He said that this represents an incentive for the non-state actor to not target civilians as terrorist groups do, and for the state to get back around the negotiation table. He spoke about how and why the PKK’s internal organisational structures do not match those of terrorist groups, and that the nature of the conflict points away from reasonable definitions of terrorism. Mr. Fermon outlined his defence further and explained the court’s decision that saw the end of all prosecution against 40 people and 2 companies for being PKK “agents” in Belgium. He then reflected on the implications of the case, saying that the law is now “clearer”, and that it will facilitate greater freedom of expression, opening up debate and discussion around the Kurdish issue. He said that had the decision gone the other way, it would have been “counter-productive” with regards to ongoing attempts to put the peace process back on the international agenda.

Alastair Lyon began by proclaiming the importance of the court’s decision and by agreeing with Les Levidow that the definition of terrorism is too broad. He noted the irony that the PKK was observing a ceasefire when it first was proscribed in the UK in 2001. Mr. Lyon agreed that anti-terror legislation is applied in the UK for political purposes, giving the example of how community centres are raided and activists often targeted before the visit of Turkish politicians. He said that the criminal justice system has been used to delegitimise legitimate political movements and causes, and, agreeing again with Mr. Levidow, to suit foreign policy aims (i.e. maintaining good relations with the Turkish state). Lyon also spoke about the lottery of returning YPG/J fighters – some have been allowed to return with little hassle at all, while other have faced court, a perfect example of how arbitrary the current anti-terror regime is. He closed by thanking Jan Fermon for his work on the Belgian case.

The views of our speakers do not necessarily represent the views of the Centre for Kurdish Progress.

Jan Fermon is a lawyer at the bar of Brussels (Belgium) since 1989. He is the acting Secretary General of the International Association of Democratic Lawyers. He is specialised in criminal law, international law and human rights. He assisted political activists and movements that were criminalised either in their homelands or in Belgium and other European countries. He acted as a trial observer on behalf of several international organisations amongst others in trials against political activists in Turkey. He is the author of a book (with Prof. Ties Prakken) on Political Defence (in Dutch). In a recent trial in Belgium against 42 alleged PKK members and leaders he pleaded with success that the conflict between Turkey and the Kurds should be ruled by international humanitarian law and not by national anti-terrorist laws.”

Melanie Gingell is a barrister and human rights activist. She is an associate tenant at Doughty Street Chambers in London, a visiting fellow in international human rights law at London Southbank University and a campaigns coordinator at Peace in Kurdistan. She worked in the field of family and criminal law for many years often representing victims of gender-based violence. She is a member of the advisory board of the Gulf Centre for Human Rights (GCHR) and a member of the executive of the Bar Human Rights Committee, which has led her to be involved in research projects and trial observations in the Middle East and beyond.

Les Levidow helped to set up the Campaign Against Criminalising Communities (CAMPACC), initially to oppose the UK’s Terrorism Act 2000, through networks of several migrant communities opposing its bans on national liberation movements such as the PKK. CAMPACC later opposed all subsequent anti-terror legislation, especially its executive powers of punishment without trial. Previously he was involved in other UK campaigns against criminalisation, e.g. the Prevention of Terrorism Act 1974 targeting the Irish. He has opposed the occupation of Palestine through various campaigns since the 1980s. He is also an academic researcher.

Alastair Lyon is a solicitor at Birnberg Peirce, a long-established firm dedicated to upholding civil rights and liberties. Over many years he has represented activists fighting for the Kurdish cause, including those sought for extradition by the Turkish authorities and those arrested by the authorities in this country for domestic prosecution. Most recently, he has been assisting those detained on their return from assisting the YPG in Rojava, including Josh Walker, a young Welshman prosecuted at Birmingham Crown Court under anti-terror legislation.